What has grown to become Australia’s leading plumbing industry association – and a trusted source of information, advice and expertise – started from humble beginnings. Kathryn Kernohan reports.

In 1891, the Associated Master Plumbers of Victoria, now known as the Master Plumbers and Mechanical Services Association of Australia, was established when 57 plumbing contractors paid a £5 entrance fee and £1 subscription to create the new entity.

One of the contractors was Melbourne-based family business Atherton. As Master Plumbers celebrates its 130th anniversary this year, Atherton is still going strong.

Initially established as a plumbing firm, Atherton is now a world leader in sterilization equipment and infection control products for the hospital, medical and scientific industries.

The 130th anniversary of Master Plumbers is a great opportunity to reflect on all of the Association’s successes and achievements along the journey – but we do so with one eye focused on the future and how we can continue to evolve our work to best serve our members and industry. Fourth-generation business owner Stephen Atherton, a life member of Master Plumbers, says the business was founded by Fred Atherton in 1889. More than 130 years later, Stephen is semi-retired after a long career with the business but the Atherton name has continued into a fifth generation with Stephen’s children Tom and Hacia serving as CEO and Chief Operating Officer, respectively.

“Fred was a plumber from Liverpool and he came to Australia during the gold rush,” Stephen says. “He soon realised he wasn’t going to make his fortune in gold … instead he worked as a plumber for many, many years.

“He started his own plumbing business and at the time when Master Plumbers was founded, sewerage was the new big thing. Melbourne was called ‘Smellbourne’ by many people and with concerns about diseases there was a pressing need for sewerage.”

At the time, Melbourne was still reliant on an outdated and increasingly dangerous sanitary system despite the city’s population and development growth.

Cesspits and pails were used to deal with solid excremental waste, and household and manufacturing liquid waste found its way into open street channels leading to the Yarra River or Hobsons Bay.

The newly-formed Association viewed this as an opportunity for education, and began holding lectures on sanitary matters to plumbers at Melbourne’s Working Men’s College.

This would be the start of a century-long tradition of education for Master Plumbers, culminating in the Association becoming a Registered Training Organisation (RTO) in 1992 and, together with the Plumbing and Pipe Trades Employees Union (PPTEU), National Fire Industry Association of Australia (NFIA) and the Air Conditioning and Mechanical Contractors Association (AMCA)opening the state-of-the-art Plumbing Industry Climate Action Centre (PICAC) in Brunswick in 2009.

Since then, additional PICAC campuses have opened in Geelong, Narre Warren, Beenleigh (Queensland) and in New South Wales. The Narre Warren campus, opened in 2019, is a $30m state of the art building and the first Net Zero Energy education and research facility in Victoria which generates all the energy it requires through renewable energy technology.

Over the last financial year, Master Plumbers delivered more than 100,000 hours of training to over 1,000 students.

Education has been a crucial part of the relationship between Master Plumbers and Bill Durham, who served as President of the Association between 1994 and 2010.

“My story goes back to 1952 when I was 21 years old and working around the clock as a plumber but I was disappointed in the results of my hard work,” he says.

“Someone told me to call the Association for some advice and I ended up having a long chat. I was asked what my qualifications were and I said, I’m a qualified plumber. The response was ‘that’s not good enough.’

“I was encouraged to enrol in RMIT and do a business course. It changed everything for me. After that the clients and I were on a level basis. It made me realise that knowledge is so important - you’d expect a plumber to know about plumbing but not about business.”

These days, technology and the internet go hand-in-hand with the plumbing industry, as advances over the last few decades have streamlined the way business can be done.

Bill was at the forefront of these changes as President at the time.

“The computerisation of the industry changed everything, made things easier and opened up new opportunities. I remember my first computer and my assistant trying to learn how to use it when it was first installed. I said ‘don’t worry, just throw it out’ but I am glad we persisted with it,” he says with a laugh.

Personal highlights from Bill’s tenure as President include work to support greater gender equity in the plumbing industry, the establishment of the Master Plumbers’ Plumbing and Gasfitting Division and the relationship Master Plumbers was able to build with political decision makers.

“For example, when the Federal Government was proposing to introduce the GST, they came to see us and enlisted our help to understand the impact it would have on the plumbing industry. That was very rewarding,” he says.

The ongoing advocacy that Master Plumbers engages in - as the industry’s representative and voice on safety, standards and training - is something held in high regard by Kevin Shinners, current Vice-President of Master Plumbers’ Board and Life Member of the Association.

“I don’t believe the general industry has a strong understanding of the work Master Plumbers does behind doors in terms of advocacy and influencing policy changes. We work very hard to make a difference and ensure the best opportunities for the industry as a whole,” he says.

Master Plumbers’ Board sets the strategic direction of the Association and represents the voices and interests of its members. The Board also helped the industry navigate the COVID-19 crisis of the past year, including collaborating with Government and industry stakeholders to ensure that vital industries kept operating in a COVID-safe way.

Kevin, who is also a Director at Shinners Plumbing, the business his father established in the 1950s, says that despite the challenges of the past 12 months there is reason for great optimism about the future of the plumbing industry.

“Our industry really didn’t miss a beat during COVID. We had to develop protocols and different ways of working, of course, but plumbing is an essential trade and it was recognised as such during our periods of lockdown.

“Industry statistics have showed that the building industry, including the plumbing industry, handled it all very well. One thing I have noticed is that it has taught the industry to be self-reliant. With Master Plumbers, we have proven that data collection and oversight is very important and we are able to lead the way in that area instead of relying on Government.”

In the short to medium-term, the Board is focused on succession planning and encouraging a younger generation of members to work towards leadership roles.

“The current Board will not be around forever and we want people to know that a big focus of ours will be on fostering succession. We want younger people to get involved, perhaps by starting in smaller groups like the Plumbing and Gasfitting Division, and potentially working their way from there,” he says.

Master Plumbers’ membership has grown over the years to over 975 plumbing businesses, which employ more than 5,000 plumbing professionals. During COVID, members were able to engage with the Association in different ways such as webinars and virtual meetings.

CEO Peter Daly says that the Association will continue to play the vital role of conduit between members, the broader plumbing industry and governments.

“Engaging with our members, hearing their stories and experiences and ensuring we can help to advocate for their best interests has always been crucial to what Master Plumbers does. Of course, this is alongside our commitment to providing opportunities for training and skill development, expert advice and information,” he says.

“The 130th anniversary of Master Plumbers is a great opportunity to reflect on all of the Association’s successes and achievements along the journey - but we do so with one eye focused on the future and how we can continue to evolve our work to best serve our members and industry.” The 130th anniversary of Master Plumbers is a great opportunity to reflect on all of the Association’s successes and achievements along the journey – but we do so with one eye focused on the future and how we can continue to evolve our work to best serve our members and industry. 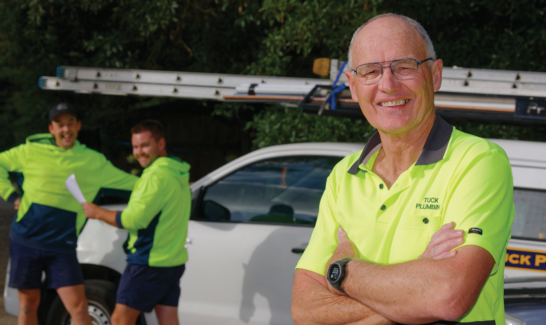 John Tuck is retiring from the business he created 50 years ago. His business is so successful it will continue with his name. Kathryn Kernohan chats to John about plumbing, business...